Filed under Balabac {no comments} 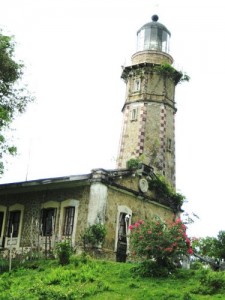 The Melville lighthouse stands watch on the lonely southern coast of  Balabac Island. It takes a bit of work to get there but it was very well worth the time to me.

I suggest taking a full week to make the round trip from Puerto Princesa, the capital of Palawan.

You can not actually see Borneo from here, but there is a mountainous island  south of Balabac that is  visible but it is still a Philippine territory. It’s still pretty cool though.

There is a caretaker there at the lighthouse to keep it from being vandalized and it is still in good shape.

A new solar powered model has been set up a couple of hundred meters from the original.

The Spanish originally built this beautiful block lighthouse but lost it to the Americans in 1898. It looks to me like it is made from blocks of coral.

If you are a serious lighthouse fan and want to make a trip to see it maybe I can give a few pointers. Drive a van or hire a driver to take you to Rio Tuba at the southern end of Palawan. Stay there for the night – possibly at Maya’s Pension. 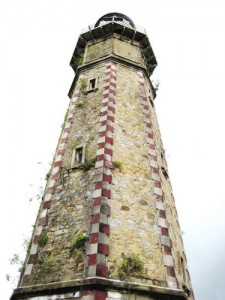 Maya’s is rustic but at least it is a roof over your head. Head down to the pier that day and get on the list for the ferry leaving in the morning the following day.

The Coast Guard does not allow the vessel to carry more passengers than it is certified  for so make sure to be on the list or get there early the following morning.

The boat leaves around noon filipino time and gets to Balabac around dinner time just before it starts getting dark. 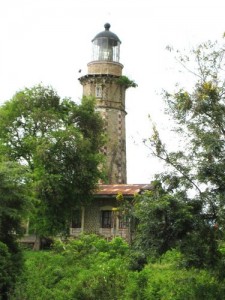 In Balabac I stay at the JD Lodge, which is also a rustic accommodation. Here is where some will run into difficulties.

You will have to hire a pumpboat or speed boat to run you down to the south side of the island. The town of Balabac is on the north end and the trip takes about two hours.

I do not know how much they will charge, but the cost of fuel and a boatman’s wages for the whole day will have to be factored in. I think they will suggest a price of around 10,000 pesos and work downwards from there.

I lucked out and  caught a lift with a friend that was going down there anyway and let me tag along.

This is definitely the wild card and will determine how much this trip is going to cost.

Another point of interest is that this area can be unstable politically so it will be a very good idea to check with the barangay captain to make sure the boatman you hire is a respected fellow.

When you get to the south end the boatman will stay with his boat. It is not as easy finding the trail to the lighthouse on your own as you would think so it would be advisable to hire a local to show the way.

The boatman will know people in the area that can help. You will have to cut across private property and over a few fences to get there.

If you have any questions just use the comment area below and I will try to help out.

Theme SWIFT by Satish Gandham, a product of SwiftThemes.Com Copyright © 2020 Go Palawan | Entries (RSS) and Comments (RSS) powered by WordPress [Back to top ↑ ]