Filed under Palawan {no comments}

Palawan is rapidly becoming the top destination for travelers to the Philippines. With the gopalawan website we hope to provide some information on this site to give future visitors an idea of what is in store. 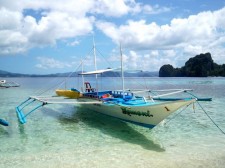 Many visitors head north to El Nido, Sabang and Port Barton but we also plan to  include a bit of information about southern Palawan too. There is less infrastructure for the tourist the further south you get from Puerto Princesa – the capitol of Palawan.

ATM machines are not available once you leave Puerto Princessa. Some of the more expensive resorts accept credit cards but most travelers would be better off bringing extra cash with them. Puerto Princesa has several banks and one big shopping mall and has developed into a modern city with all the features you would expect .

My favorite restaurant is Ka Luis on the airport road. I like to stay upstairs Amelias Pension on the same road. Probably the cheapest place to stay would be the Dutchess Pension in town near the park. Puerto Princesa has plenty of restaurants and cafes and fast food outlets.

Cat and flower in Sabang

Most visitors arrive by plane because Palawan is in the middle of nowhere. Its just 400 kilometer string bean shaped island in the middle of the South China Sea with a couple islands at either end. Rather than copy a bunch of boring details from other sites and paste them here I decided to get all my information first hand. I am no expert but will be happy to try to answer questions and give tips when I can.

I have covered Palawan from Balabac Island in the south to Busuanga Island in the north. I travel by motorbike and boat and prefer getting off the beaten path but enjoy being on the tourist trail quite a bit too!

Sabang Beach is a favorite even though it gets heavy tourist pressure. There are upscale resorts being completed there for those that prefer camping in style but we still rent a 500 peso nipa hut right on the beach and have the ocean, moon, and stars all to ourselves on our midnight swims.

The Sabang Underground River is the big draw and it is surely worth your time to visit. Many travelers take the 2 hour shuttle  ride from Puerto Princesa, see the cave, have lunch and are back in Puerto that night. Budget travelers can also take the jeepney for 200 pesos.

Port Barton has a unique character and many find the laid back lifestyle there to be appealing.

The water there is quite shallow so most visitors hire out small boats to take them to the sandy beaches on the nearby islands where swimming is easy. 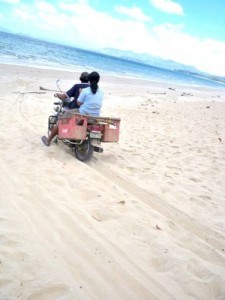 There are also blue jellyfish that float around the bay during certain times of the year, which can be annoying if not painful.

Long beach in SanVicente is possibly one of the best beaches in the Philippines. It is just now being developed as lawmakers appropriated money to build a modern runway nearby.

Big land developers are scrambling to get resorts built as I write this. It should be a “success”!

Cannon at fort in Tay Tay

Tay Tay has an old Spanish Fort that might interest history buffs.

The Taylelong Pension is a good place to stay for the night if you want to rest up before driving to EL Nido.

El Nido itself is my top choice for a holiday in the Philippines.

The scenery is spectacular and the costs are low. I like to stay at the Ogie’s Pension right on the waters edge, (most of the resorts in El Nido are on the water too).

From El Nido you can take boats to Coron. If you are planning Coron as your main destination, we suggest flying from Manila because it is cheap, quick and painless. For some the boat ride is not that pleasant but it does have an element of adventure.

The Safari Park on Busuanga Island is really bizarre. Here there are free ranging zebras and giraffes on nearby Calauit Island. There are also rare endangered animals from Palawan here.

We hope to keep this site growing as we get more information and help from our readers.

Theme SWIFT by Satish Gandham, a product of SwiftThemes.Com Copyright © 2022 Go Palawan | Entries (RSS) and Comments (RSS) powered by WordPress [Back to top ↑ ]